Comedy at the Park 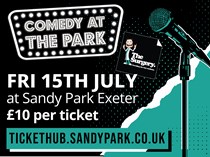 Comedians working with the Comedy Surgery we are guaranteed top comics to keep you laughing all night.

Jon started his comedy career in 2010 and has since performed all over the UK. He has supported both Darren Harriot and Lucy Porter on their tours and is a familiar face at comedy festivals. You may have seen him make an appearance at prestigious comedy clubs like The Glee, The Boat Show and Up The Creek demonstrating his laid-back storytelling style with his audiences hanging on his every word. His tales are based around his own life experiences with relatable anecdotes leaving people in stitches of laughter.

Stephanie started on the Scottish comedy circuit and was later recognised for her talent as a nominee in the final of the Leicester Mercury Comedian of The Year competition. Over her career, she has appeared as a festival stalwart, taking to the stage at the Edinburgh Fringe every year since 2010. Melbourne, Adelaide and Perth’s comedy festivals played host to her tour ‘Mad About The Boy’ leaving audiences in hysterics. She is what is best described as goofy and peculiar, mixing silliness, filth, and unusual observations, yet remaining charmingly vulnerable with her candidness.

Matt has been performing over the last five years at some of the UK’s largest comedy clubs and has recently been on tour opening for the likes of John Bishop, Suzi Ruffell, Jason Manford, Lloyd Griffith, Harry Hill and Scott Bennett. The winner of multiple comedy awards, he has a blisteringly sharp, hilariously funny deadpan and low energy style that makes him a comedic force to be reckoned with. Dry humour, subtle anecdotes and a master of delivery, this cool customer will have you laughing your socks off. Oh, and he comes ‘beyond highly recommended’ by Johnny Vegas.

Tickets for this fantastic Comedy night start from £10 or £18 with Hot Food:

Get your tickets here